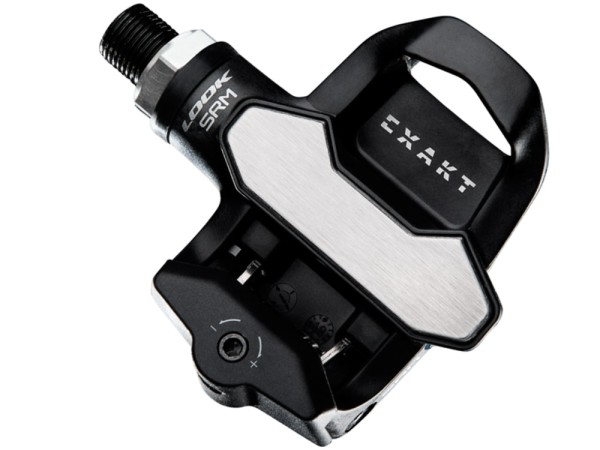 SRM teamed up with Look to create the Exakt pedals. SRM developed the first PowerMeter in 1986, then democratized this technology by equipping the greatest champions and cyclists in search of reliable and accurate products. LOOK invented the first automatic pedal in 1984, revolutionizing the world of cycling. With the constant development in the past decades, Look pedals have become a symbol for innovation and performance.

SRM stands for quality and an astonishing accuracy of 1.5%.

The SRM/Look Exakt pedal power meter is available in two versions. The Exakt DUAL pedals feature an independent left and right power measurement, thus offering the most accurate measurement as well as further insight such as left/right balance and torque analysis.

The Exakt SINGLE pedals feature a single sided measurement of the right side, the left pedal comes without electronics. A single sided system usually is sufficent for most people without muscular dysbalance between left and right leg who just want simple but accurate power data without further insight.

The Exakt pedals use ANT+ as well as Bluetooth Smart. All bike computers with PWR-Profile are compatibel as well as many smartphones.

The optional PC8 Bundle is the perfect complement for the SRM Power Meter. You get the SRM Powercontrol 8 bike computer with speed and HR-sensor for an attractive price.

The PC8 is a minimalistic bike computer. The functions are tailored to the needs of athletes. It therefore is very popular and frequently encountered in the pro peloton.
The PC8 has a GPS function that can be used to record training or competition. The GPS function can be turned off, as can the backlight - increasing battery life to up to 45 hours.
Thanks to the generous memory of 500MB, approximately 4000 hours of training and competition can be recorded in the user-friendly .fit format. The built-in motion sensor automatically activates the PC8 as soon as the ride is started.
Up to four different bike profiles can be created, eliminating the hassle of pairing with different power meters on different bikes. The display is freely configurable.

Included in the bundle are heart rate belt and speed sensor.

Very light and easy to setup

Very light and easy to setup