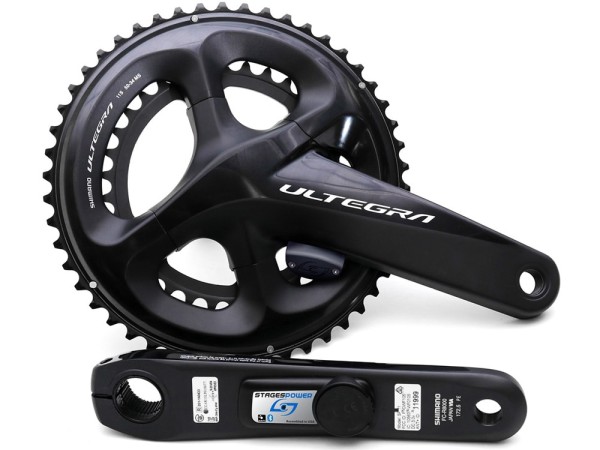 The Stages Power LR Ultegra R8000 comes as a complete crankset including spider and chainrings and offers a dual-sided measurement on both crank arms. The Stages Powermeter is now available in the 3rd generation. The Gen3 models have a more accurate measurement, stronger transmission power to the bike computer and an improved cadence sensor. The total weight of the crankset is increased by only 35 grams.

For mounting the Stages Power LR Ultegra R8000 you need the TL-FC16 tool.

The Stages Power LR Ultegra R8000 is compatible with all Shimano 11-speed road groups (105, Ultegra, Dura Ace). If a Shimano crank is already installed on your bike, you can simply replace it with the Stages LR crank. If a crank from another manufacturer is installed, the bottom bracket probably has to be replaced as well.
The left power meter is mounted on the inside of the crank arm. Therefore, 10mm space is required between the crank arm and frame. With direct-mount brakes it is often too tight. You can check with a 10mm allen wrench whether a Stages power meter fits onto your bike. In the power meter area, the 10mm allen wrench must fit between the frame and crank arm:

The Stages Power LR Ultegra R8000 Powermeter is powered by two standard CR2032 button cells. The batteries are sufficient for about 175 hours of operation of the powermeter. The CR2032 is widely used and inexpensive. It is available at almost every supermarket. The battery can be changed without tools. The LED on the power meter provides information about the battery level.

The assembly of the Stages Power LR Ultegra R8000 Powermeter is very simple. The existing crankset is simply replaced by the Stages crankset. For Shimano cranks, this requires only a standard 5mm allen key and the  TL-FC16 tool. With a little practice, the installation is done within 5 minutes.

The Best shop for powerme...

The Best shop for powermeters.

The Best shop for powerme...

The Best shop for powermeters.

I spoke to Alex on the phone which was super nice. They did not have the Stages available right away but Alex shot me an E-mail two days later and I could stop by and pick it up. Great experience, super service!

Spoke on the phone with A...

Spoke on the phone with Alex to confirm availability, placed the order and paid online via PayPal, picked up the item 2 hours later in Berlin - smooth as silk! I highly recommend Powermetershop.de for their professionalism.