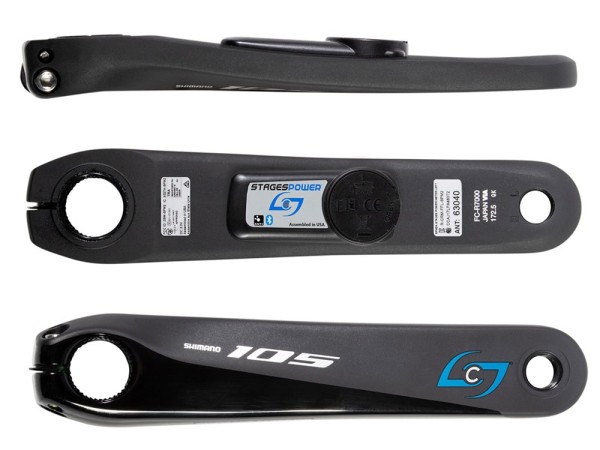 For 105 R7000 riders Stages offers a power meter as a replacement non-drive crank arm for existing 105 model cranks. Riders looking to add power to their existing crank need only select length, as the Stages Power meter for 105 fits all styles of Shimano road crankset, including: compact and standard.

For mounting the Stages Power L 105 you need the TL-FC16 tool.

The special thing about Shimano: the Stages Shimano 105 R7000 power meter fits not only to cranks of the same series, but to all Hollowtech II road cranks (eg Ultegra 8100 or Dura Ace).
Since Shimano gear is most often found on road bikes, the Stages 105 R7000 power meter is ideal for bringing it along to a training camp - provided that the rental bike also has a Hollowtech II road crankset.

The Stages Shimano 105 R7000 power meter is powered by a standard CR2032 button cell. A battery is sufficient for about 200 hours of operation time. The CR2032 is widely used and inexpensive. It is available at almost every supermarket. The battery can be changed without tools. The LED on the power meter provides information about the battery level.

The installation of the Stages power meter is very simple. The left crank arm of your crank is simply replaced by the Stages crank arm. For the Stages Shimano 105 R7000 power meter you need a 5mm allen wrench and the Shimano TL-FC16 crank assembly tool. It's needed to loosen or tighten the bolt that pulls the left crank onto the axle.

Ship on time - only three days for an international delivery.

Stages Power L works well. Only one ride and hope will continue like that :)

Ship on time - only three days for an international delivery.

Stages Power L works well. Only one ride and hope will continue like that :)

One of the smallest pod s...

One of the smallest pod sticking out. Compared to 4iiii there is a lot more space between bike frame and crank pod. Works perfect.

Fast shiping and PM works great with my Garmin Edge 530.

Very good price and fast delivery. Product worked great although I had to change crank length in settings on android app.

Just what I was expecting...

Just what I was expecting!

Quick service. Arrived as expected and functions well. Thank you!

Shipping was fast. The pr...

Shipping was fast. The product is flawless.

I have the item from this shop nearly a month now and I am more than happy with it, the delivery was as shift as possible and the power meter works perfectly, and has very accurate data I highly recommend it to any one that needs an accurate analysis of data from a left based crank thanks a lot